Using AWS as a “Platform” of Marketing

Requests from Fans Are Unable to be Met with On-Premises

In 2011, in an effort to better serve their customers via a digital platform, Starbucks built a web system using on-premises software.

However due to their strong following and regular user engagement, huge traffic spikes within a short time frame often occurred. Whenever Starbucks gave any notification of promotions for example, countless users would view the site simultaneously, leaving the infrastructure unable to cope with the heavy load. As a result of the poor flexibility, and scalability of the on-premises system, unavoidable problems soon arose. Problems such as an increase operational costs, delays in response to business speed, and, above all – the inability to meet their users’ expectations.

In order to resolve these problems, Starbucks Coffee Japan took cloud services into consideration beginning in 2012. When they first committed to this decision, they knew that they wanted to retain complete ownership of their resources, as well as be the sole entity when it came to the operating of their services. They ultimately decided on Amazon Web Services (AWS) technology, not only for its ease of use, but also for AWS’ proven track record of global implementation, as well as its ability to be used on demand in an economical manner.

Despite having migrated their entire front-end system onto AWS with the support of an IT vendor, they still encountered manageability problems. With users’ needs changing consistently, along with the constantly changing IT environment, it became evident that their systems needed a dramatic improvement. They realized that they also needed to reconsider their back-end system, along with how to properly utilize user information which had been accumulating since 2011.

Starbucks Coffee Japan wanted to first optimize how they work with AWS by maintaining their user database as big data in an effective manner. To do this they needed a vendor that was not only proficient in AWS technologies, but one that could also understand their business needs in depth. By actively looking for a vendor that possesses these qualities, we Classmethod, were ultimately chosen for the task.

Using AWS as a Marketing Platform

Classmethod began the responsibility of being the technical support for Starbucks Coffee Japan beginning in 2014. To this day, we continue to support them. In addition to AWS, we also offer them support in various other development projects, such as mobile apps and big data. 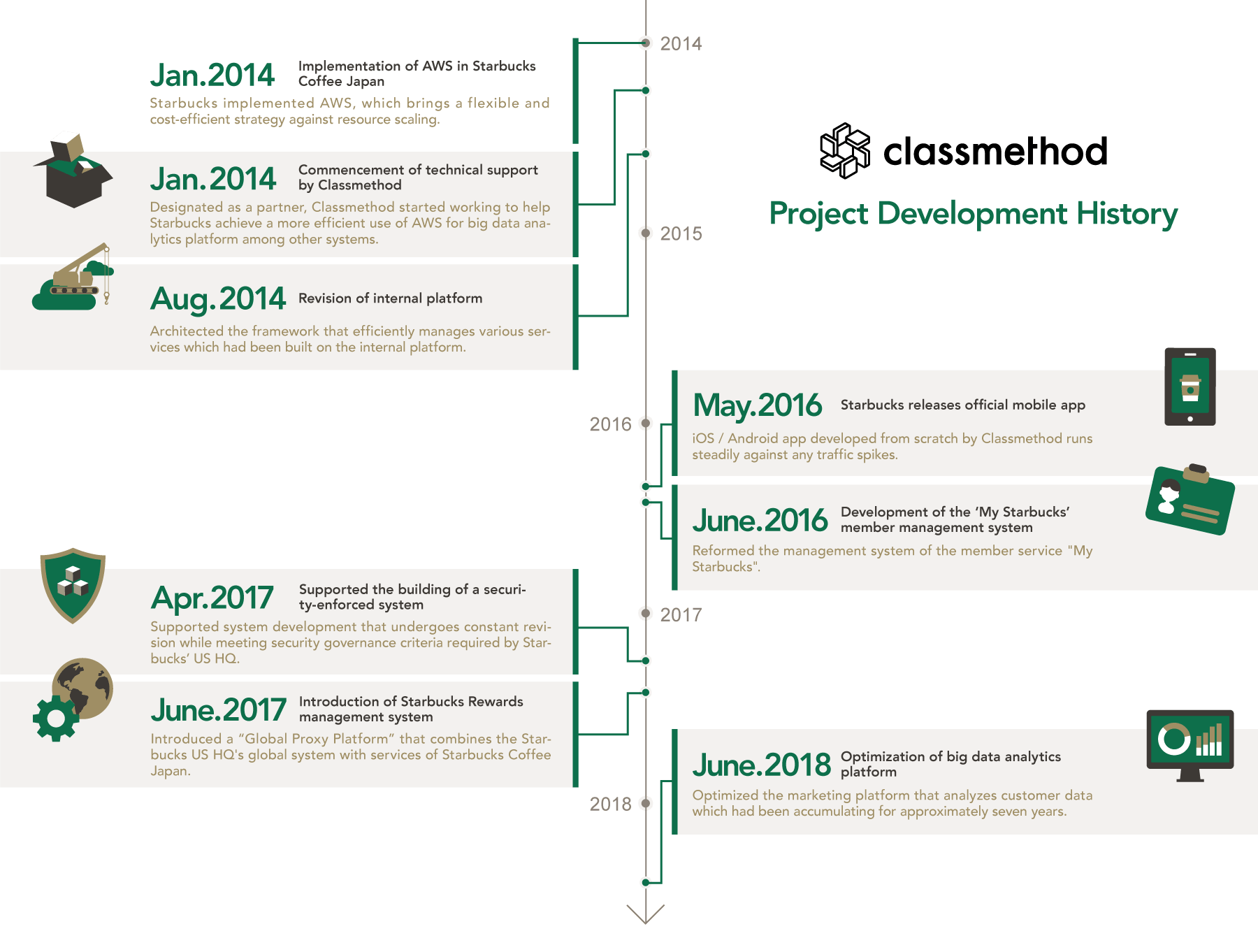 The first thing Starbucks Coffee had requested was to optimize the way in which they used AWS technology. Additionally, they adopted Multi-vendor, micro service, and the Agile model, into their development strategy in hopes to provide their users with new services quickly. They wanted to provide these services by combining them with cooperation from different internal and external teams, both of which were involved in their development. In accordance with Starbucks’ desires, Classmethod architected the framework to efficiently, and flexibly manage the services which were already been built on AWS. System monitoring was generally outsourced at the time. However, as a result of the comprehensive hands-on training conducted by Classmethod’s engineers, Starbucks is now able to fine tune their system themselves based on changes in operation and user trends.

Classmethod also developed the mobile app for Starbucks Japan so that users could use their Starbucks Card more easily. We made the app available on iOS and Android devices. For this project, we developed the app from scratch in three teams. One for each OS, and one for server side. Due to scalability being a top priority, we made the system extremely durable in the event of a traffic spike. Although the app was later integrated with the app from their US headquarters’, basic back-end functions such as API, which were originally provided by Classmethod, are still being used in the current version.

Additionally, Starbucks Coffee Japan is obligated to be compliant with strict security governance from their US headquarters. From the settings of AWS managed services, to the details of how to use the app, Classmethod assisted Starbucks Coffee Japan in configuring the app so that all staff in charge of development and operation could work together whenever the app is in need of improvement or revision.

As previously mentioned, all of their existing services are required to meet a certain criteria rather quickly. The introduction of the new rewards program “Starbucks Rewards ™”, which had been promoted by the joint development of Starbucks US and Japan became a top priority. For this development project, they also needed to combine the application of Starbucks US with a “Global Proxy Platform” – the API layer that connects seamlessly with Starbucks Coffee Japan’s services. Classmethod took charge of the service development in collaboration with other Japanese vendors, which resulted in a successful release of the service, while meeting the high security criteria.

Finally, at the end of 2017, Classmethod began to optimize the big data analytics platform of Starbucks Japan, which was the original purpose they had consulted us. For Starbucks Coffee, the system which analyzes their user data is the “engine” of customer service. Starbucks Coffee Japan stated that they would like to give all their customers a more optimized, as well as enjoyable services through the adaptation of advanced technologies. These old services had finally been optimized thanks to Classmethod’s support.

For Starbucks Coffee Japan, the completion of the system development was not the end goal. For them it was what to do afterwards. That is why they wanted a partner who could deeply understand their business in every detail, including abstract ideas and concepts. It was Classmethod who met these expectations.

Starbucks Coffee Japan can now proudly claim that they are very experienced in building services in collaboration with many different partners. What is particularly noteworthy, is the trust which they place in their partner companies by sharing with them as much information as possible. They expand on what they aim to do going forward and collaborate with their partners on how to go about achieving these future goals together. An example of this are the co-organized seminars they hold with their partners every quarter in order to thoroughly discuss things like how projects have resulted, or where certain problems lie. As a result, their partners have a clear understanding of the goals and desires of Starbucks Coffee Japan.

It is considered normal practice among system vendors to take full control of a project. Classmethod however chooses to cooperate and even recommend other companies to our clients if needed. Starbucks Coffee appreciated this flexibility and efficiency on our part immensely.

For Starbucks Coffee Japan, Classmethod has played an integral role over the years in supporting their projects while also being responsible for the platform. We deepened our understanding of Starbucks Coffee’s business, and voluntarily suggested other companies, which made it easy for Starbucks to make their decisions quickly.

We have received praises from Starbuck Coffee Japan concerning the following points:
・Every engineer has advanced knowledge about AWS.
・Classmethod has generously offered a multitude of high-level advice.
・Classmethod has expertise in areas other than AWS.

Creating New Services Which Could Only Be Found at Starbucks

Furthermore, Starbucks Coffee will expand to provide a wide range of services for their customers in the future, not only in the form of food and beverages, but also through experiences which can only be had with Starbucks Coffee. In accordance with their principles, they also want their partner companies to have a similar experience in development that is unique to Starbucks. Classmethod is proud to continue their work with Starbucks Coffee Japan in the sharing of new and advanced ideas.

We are pleased to support our clients in improving the quality of their service as well as provide Starbucks fans with services only capable of being achieved by Classmethod.

“Classmethod Members” is our AWS total support service. As an AWS Premier Consulting Partner with over 2,500 cases and 300 AWS certifications, Classmethod delivers end-to-end solutions which include consultation, migration, 24/7 maintenance, and VPN services between corporate data centers and AWS.